Say cannabis in a room full of people, and you’ll hear loud gasps, disapproving tuts, and maybe an awkward cough from someone in the room who is already high. Talking about it is so controversial, but what happens when someone smokes it? Despite public outcries, governments around the world are revisiting cannabis laws. Still, the question remains – with over 11.8 million users in the US alone, when will marijuana be federally legal?

Why is Weed Illegal Anyway?

Literally, everyone smokes it or has smoked it. Just ask Obama. So ‘why is weed illegal?’ The link to criminalizing weed and its products in the US dates back to the 1930s when Harry J. Anslinger became head of the Federal Bureau of Narcotics. Surprisingly, even back then, most scientists who were asked about the dangers of the plant said there was no actual danger posed by it. Banning the plant’s use had dark political undertones and definitely not due to the plant being threatening.

We fast forward to 90 years later, and the only thing we have learned from Anslinger’s marijuana ban was that he is the world’s best marketer. So much so that it has been literally 100 years (well almost) since his marketing campaign against marijuana began, and it is still being used. Maybe the real question should be: why isn’t this the case study we’re given in business school? A close second question is: when will we see the decriminalization of weed? When will the archaic cannabis laws be challenged?

The Way We See Marijuana is Changing

From the beautiful marijuana plant comes the sensational cannabidiol. The chemical that is helping change the perspective on the miracle plant. Cannabidiol, more commonly known as CBD, was wrongly marked as a narcotic in 1931, and carrying it could lead to a life sentence in prison. Sounds pretty crazy, doesn’t it? Over time, laws on cannabis have lightened. However, people’s perceptions seem to stay unchangeable. However, its 2021 and state governments have decided to legalize the substance, for the most part.

So far, when it comes to US marijuana legalization:

Why Should Cannabis be Legalized?

Many states have already moved towards marijuana legalization. Mainly due to the apparent fact that marijuana has been proven to have positive effects on both the mind & body. When it comes to understanding the plant, people also ask, “what do cannabinoids do to the body?” Cannabidiol (CBD) is the part of the plant that has proven to be the most useful for mental and physical health. Contrary to popular belief, CBD is not just smoked. It can be smoked, vaped, taken orally, or even used in food and balms.

CBD benefits far outweigh the reasons it was criminalized for, to begin with. To clarify… yes, CBD is beneficial. Let us walk you through some of the fantastic CBD effects, none of which include getting a “high,” like you would assume.

Is CBD really that great?

In short – YES! CBD oil alone has a surprising amount of benefits.

Do you have a legitimate anxiety disorder? A fear of public speaking? Perhaps you are unable to relax in large crowds. Well, here’s something that’ll help! CBD!

A large number of studies have concluded that CBD affects the way our brains respond to serotonin. In fact, CBD has been seen to relieve symptoms of post-traumatic stress disorder (PTSD).

Whether you have nagging back pains or sports injuries, there is a reason why there has been an explosion of hemp products in recent years. Researchers have seen immense potential in how CBD is used in treating pain. Mainly, the pain can be addressed without intoxication and addiction, which are side effects of typical pharmaceutical medication. Studies have shown that when CBD is applied to the skin, it has properties that reduce inflammation and pain. When applied to the skin or to muscles, CBD benefits include relief from joint pains caused by arthritis.

CBD oil is known to have anti-inflammatory properties. It is also pretty gentle on the skin. This means if you have symptoms of acne, CBD may just help with that! How exactly? CBD helps reduce sebum production on the skin, which is pretty much what causes a lot of the problems associated with acne.

Insomnia plagues much of the nation, and our lack of melatonin does nothing to help. But have you tried CBD? And what do cannabinoids do to the body to promote sleep? Research has shown that taking CBD supplements increased the duration of sleep. Studies were carried out on patients, which showed that those who took CBD oil allowed their cortisol levels to drop. This, in turn, seemed to act as a natural sedative that relaxed them enough to have a peaceful and restful sleep!

Considering these are some of the natural ways in which CBD can help humans, you may ask… 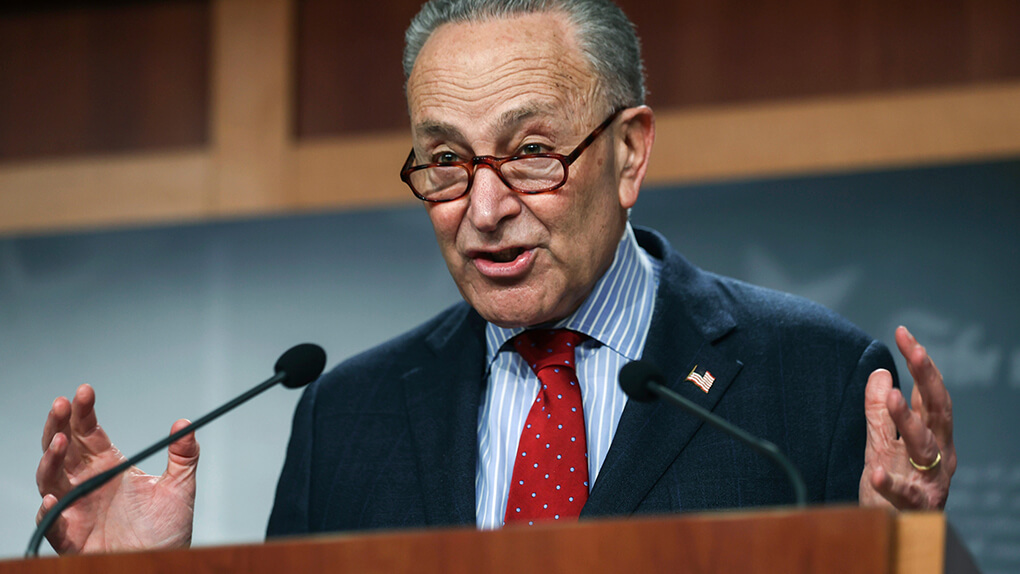 We wish we knew! So far, we have Senate Majority Leader Chuck Schumer talking about weed… a lot. While New York medical marijuana laws were relaxed in 2014, 2021 marked the year marijuana use became legal for adults. If you’re questioning whether you read that right and thinking, “Is CBD legal in NY“? We hate to be the bearers of bad news (if you are anti-marijuana), but yes. It is. Marijuana is entirely legal for adults in New York City! Schumer’s love for cannabis seems to be shared with his entire home state! Go, New York!

While state-level legalization is creeping upon us, what do we know of Biden’s stance on marijuana? Let’s put it this way, five members of the POTUS’s administration were sacked when admitting to using the plant recreationally. Indeed this could not have been the real and only reason. While there is no concrete way to know, but it seems like the President’s stance on it is stuck in the past. Across the United States, one of the most searched topics on the internet is “will Biden legalize weed?” When most of the American population is absolutely not opposed to the ban on CBD/marijuana, why is there still debate on whether to legalize the plant?

Funnily enough, from all the Democratic candidates, Biden remained the only one who was not for marijuana legalization. This seems to be a point of a clash between Schumer and Biden: 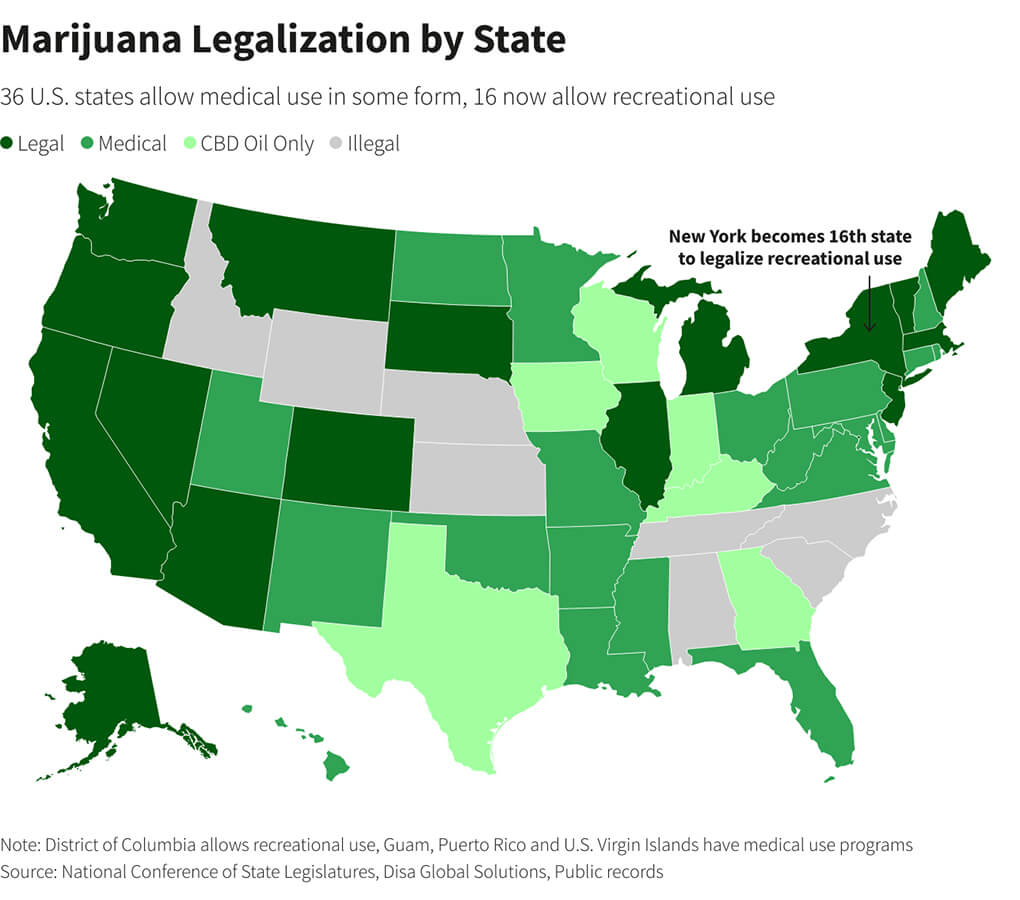 Is CBD legal in all 50 states?

No. People may also ask, “is THC illegal”, which technically falls under the same radar as weed.  However, here is a list of all states where marijuana, CBD products, and weed or which has THC is now legal:

A surprising turn of events when it comes to legal cannabinoids states in the United States, there are efforts to legalize marijuana in Texas, a majority conservative state.

Legalization and Decriminalization of Cannabis – What Can We Hope For?

USA’s views on cannabis vary, like the temperatures on the east and west coasts. While many states have gone forth with the decriminalization of weed, cannabis laws have not fully legalized the plant. The difference here is worth it to note. Decriminalization of the plant means it is very much still illegal. The only change is that a person caught with marijuana will not be prosecuted as a criminal by the system. They can still be subjected to penalties such as fines, confiscation and even be made to attend drug awareness sessions for educational purposes. This depends on the law enforcement that has caught said person with weed.

The United States is trying to move towards a change in cannabis laws that legalize use and possession. The legalization of the plant would mean removing any and all prohibitions against its use and possession. If caught with it, it would be perfectly fine, and no charges or prosecution will be undergone. So far, even legal cannabis states are subject to federal policy. This means if caught with the plant, even in a state where it is legal, one can be prosecuted. An oxymoron at best, and one which we would like to see changed. All eyes are on the Biden administration – will they listen to the voices of the majority of the nation or remain opposed to federal legalization? We’re as curious as you are!

Welcome to the Artisan Club!
70 customers are currently on the website